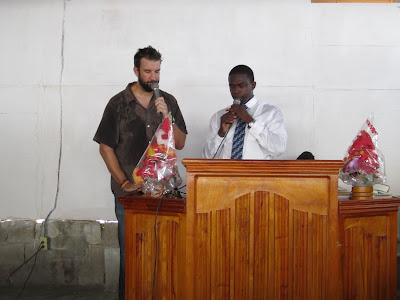 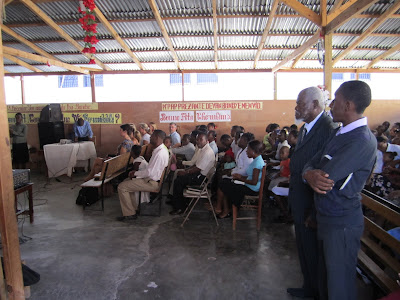 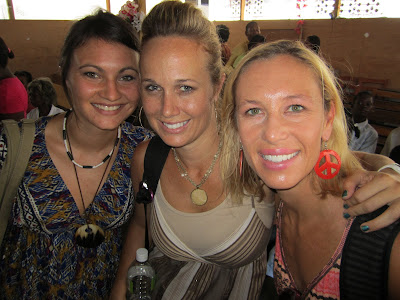 Our last day in Haiti we had the earliest day of all…we had to be up by 6am for church. On our way I was surprised to see quite a few Haitians also on their way to church. Each of them had on their Sunday best, despite the conditions that surround them. Men in long pants and button downs, women in skirts, dresses and heels and the little girls dressed in fancy Sunday dresses, similar to styles little girls at home would wear for Easter, complete with ruffle socks and dressy shoes. It was so amazing to see, especially after thinking about the effort it took them despite their surroundings. No washing machines, dryers or even an iron and yet everyone looked so nice, it truly gave new meaning to putting on your Sunday best! We arrived at Pastor Pierre’s church around 7:15 and the service had already started. Immediately the people sitting in the first two rows got up and shifted to the back so we could sit there. The Haitian hospitality continues to amaze me. The church had been destroyed during the earth quake and so the building that we were in was newly constructed and was a small with a concrete slab, a roof with block walls, that stopped a few feet before the roof began so the sides were open. They have the “band” up in the corner to the right of the pulpit. They have electricity (powered by a generator) and during church people have their cell phones all lined up charging in every available outlet.
There was a lot of singing and prayer, and after they finished their songs Pastor Pierre called Doug up to play and share a few songs. Kristan and I went up to hold the mike and music. As we sang together, Oh how he loves us, it was such an emotional moment. I felt so thankful that God brought us to Haiti and the way he showed us his love. We have so many distractions where we live, choices and options that can steer us away from God. Here in Haiti they have much more of a simple life, they fight to survive every day, and their reliance on God is something Christians in Haiti cling to.

Doug led us all in a prayer, and Pastor Pierre interpreted for him. As Doug spoke to God, I could feel the Holy Spirit speaking through Doug, shaping and praying such encouraging, loving and uplifting words for our Haitian friends. It was so sweet to see a woman come up to Doug after and tell him she was blessed by his prayer.

The church service was about 3 hours and it was SO hot and humid in the church but it didn’t even faze those in the service. Poor Doug who always sweats when leading worship was drenched!!! Pastor Pierre sat behind us and interpreted while the other pastor gave the message. We were surprised that the message itself was only about 10 min long! After there was more singing and then the pastor’s wife came up and explained the new series that would be starting for Sunday school. They also had a time for Q&A where many asked questions.
After church we gave the backpacks we had brought, filled with school supplies to the church. They planned on giving them out to the children in their congregation as well as use them as an outreach to the children in their neighborhood.
After church we drove back to the hotel to change and finish packing. We went through our things and made a pile of what we were going to donate to the Zanfan house. We had a HUGE pile of tee shirts, sports jerseys, tank tops, dresses, toiletries and shoes. After seeing how little they have and knowing all that we are blessed with we were happy to be able to give them some of our things. We loaded up the vans with our luggage and headed to Maison, the orphanage for lunch. 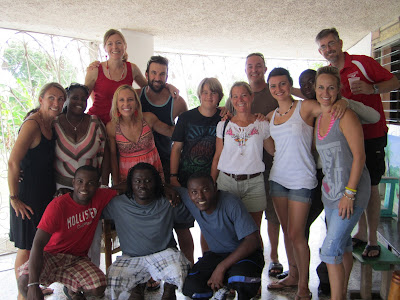 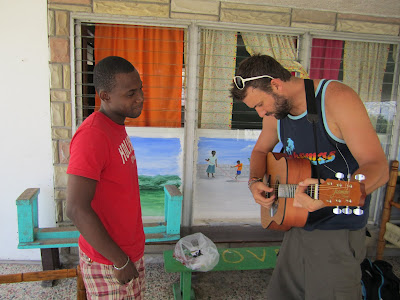 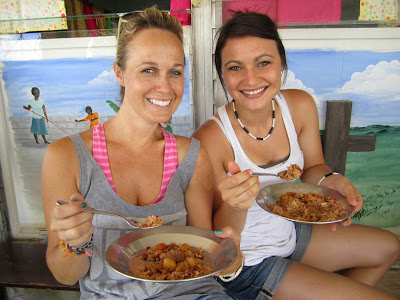 When we arrived our fabulous interpreters, Frantz & Filder were there and we were so excited to see them and be able to say goodbye. Doug had brought a guitar that he used the whole week to lead worship and he had planned on leaving it in Haiti. He really wanted to leave it with someone who would know how to play it and be able to use it to lead the Zanfan boys in praise and worship. Doug was excited that Filder expressed interest and knows how to play. He promised Doug to take the guitar over to the Zanfan kids on a regular basis and also work with Ali (Jimmy’s son who sings and knows some guitar). We also talked more with Frantz about a ministry opportunity for women on the streets who are widows, he has such a heart for the Lord and it’s so exciting to see. We are praying for them and look forward to hearing more about the details. 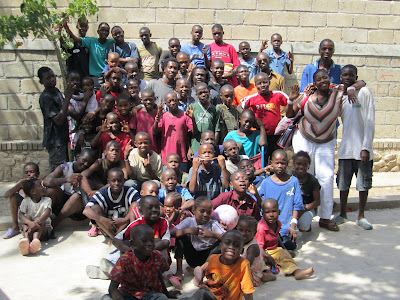 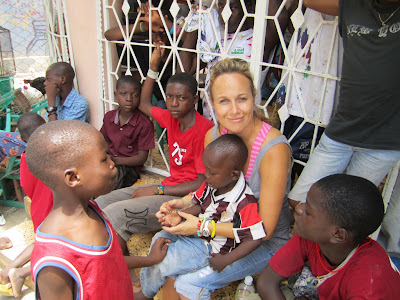 We left the orphanage, said our goodbyes to everyone and headed to Zanfan to spend a little bit of time with them before we had to say goodbye. We arrived and as soon as the boys saw Jimmy and Katia (they had stayed the night away at the hotel after the wedding) they all gathered around them shouting out…they were thrilled to see “Papa” Jimmy and Katia. We spent about an hour at Zanfan and you could feel the somber vibe in the air as they knew we were leaving. The boys were so cute, asking us if we would be back in December. Not wanting to make a promise I couldn’t keep I was vauge telling them I hope to be back but not sure when. Some of the boys just broke my heart, wanting us to adopt them. The bonds that we made and the love that these kids had to offer made us want to say “YES! We will take you all home!” But even so Doug & I had found out earlier in the week that God had shut the door on us adopting in Haiti because we do not meet 2 of the three requirements. #1 You need to be over 35, #2 You need to have been married or together at least 10 years and #3 You cannot have more than 2 children already. We pray that maybe in the future we will again be able to consider adopting from Haiti. We took a group picture of our team with all the boys and said our goodbyes.

It was bittersweet leaving, we were looking forward to getting home but sad to leave these boys we had gotten to know and love.
Pierre dropped us off at the airport and we got in line to check in, go through customs and we had to go through a security scan 3 different times!!!

We boarded the plane to Miami exhausted emotionally and physically. Carolyn and I had lost the battle against getting sick and both had bad coughs and needed rest. 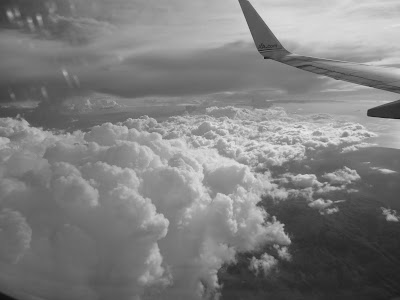 We landed in Miami and it was SO strange to be back in the states. We all took notice of the little things: public trash cans, charging stations, clean bathrooms with running water and seat covers, no trash piled up on the side of the streets…the list goes on. We checked into our hotel and immediately met downstairs around 10pm to find something to eat.
We decided to walk to a sports bar and grill that the concierge recommended. We set out hoping to get their quickly. We walked a few blocks, but didn’t seem to find it. We stopped into another restaurant to find out it was a few blocks more. Some of our group didn’t want to go any further, so they turned back to go and eat at the hotel. Kristan, Jessie, Doug and I were determined and up for the adventure of finding our destination. It was quiet on the streets and it was a hot, balmy summer night so the walk was nice. We found the restaurant in about 2-3 blocks and we were THRILLED with what we found!! There was a large selection of food and drinks. It hit us hard how many choices we take for granted. We all had a difficult time deciding on what to eat, everything looked amazing!! We decided on chips, guac and salsa to start, then seafood macaroni and cheese, shrimp scampi garlic pasta, and steak fajitas. DELISH!! We ate so much and were thankful to be able to walk some of it off on the way back.

Our hotel room was perfect!
We took a shower…and it was delightful!! The water was warm, with a shower head, no geckos or cockroaches, if water splashed in your mouth no worry for what it would do to your stomach AND there were BIG, WHITE, FLUFFY towels. I plugged in my cell phone and didn’t get electrocuted (we had major issues with the outlets in our room in Haiti and Doug and I were both repeatedly electrocuted…a few times each day). We fell into our pillow top bed, sinking off to sleep.

We had to get up the next morning at 5:00am, which was really 4! All worth it to get home.
Posted by Jennifer Harrison at 9:30 AM 3 comments: